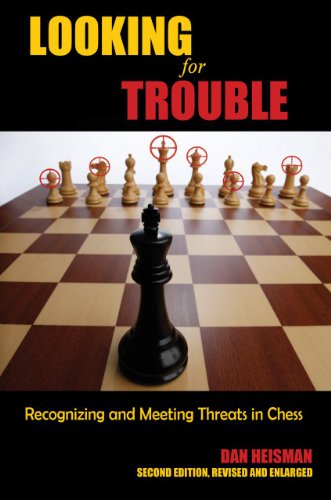 Indeed, some players are famous for their attacking skills and others for their defensive skills. But do you really think these great attacking players were attacking all the time? No, in modern chess players of all levels have to be all-round. Defending is an essential part of the game of chess. However, during the game you normally have to do both at the same time. And sometimes one has to defend tenaciously, to later on launch a deadly attack. Looking for Trouble: Recognizing and Meeting Threats in Chess focuses on beginners and players on the intermediate level.

There three main things one can do about a threat: ignore it, create a bigger counter-threat, or stop the threat. Dan Heisman patiently teaches people who are caught by the chess virus the basics of defending, during all parts of the game, whether it’s the opening, middlegame, or endgame. He is a chess author who is specialised in explaining the game to beginners who want improve.