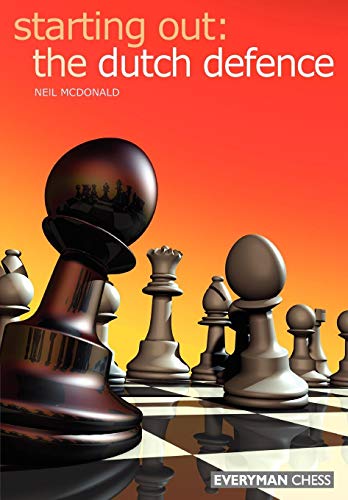 Starting Out: Dutch Defence presents the basic theory and more on the Dutch. This is the perfect book for the ambitious chess player who wants to play this sharp opening with black, but is not certain about which line exactly. It’s important to know what suits your style most. According to the author the best way to do so is to play through the illustrative games and decide in which you understood black strategy best. The Leningrad Variation, Stonewall or Classical Dutch?

These ‘big three’ variations are all very playable, but at the same time have there very own character. The book further zooms in on sharp white options like 2.Bg5, 2. Nc3 and several Dutch Gambit Lines. Whether white likes it or not, he’s now on Dutch territory and in for a fight. Tips, questions and analysis come with bright texts and diagrams. Neil McDonald is an English Grandmaster, chess coach and writer.